Weaving with ME Thread as Weft

In my experience, when you start weaving, fellow weavers come out of the woodwork with yarns to donate to your cause. I got a LOT of fiber, most of which I had no idea of what do with. When you really don't know much about weaving, it all looks foreign.

Here's spool of rayon boucle that was gifted to me in that first month of trying to figure out the craft: 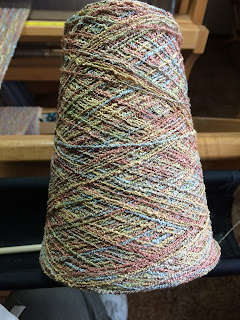 This is what I had left after winding off a 7 yard warp for a couple of 9 inch wide scarves. After 6 years of pondering weave structure and weft, inspiration struck in the form of Anita Luvera Mayer. She's a national treasure, and I'm lucky enough to be in the same weaving guild.

Anita has a long history of weaving and garment construction. She's widely known in weaving circles for her artistic views of cloth and garments. She is NOT a weaving structure person. When she weaves now, it's generally plain weave. I was in a class with her earlier this year and she showed a dress she made for her son's wedding and there it was... She didn't want to lose the beauty of the warp, so she used sewing thread for the weft. BEAUTFUL and BRILLIANT!

I wasn't thinking of practical applications in my life, only how clever Anita was.

Fast forward to last month. I REALLY wanted to warp and weave SOMETHING. I wanted a scarf to wear with my dark coral sweater. I wanted to weave with THIS BOUCLE, but the weft had me stumped. Everything I had would overpower the cascade of colors on this spool.

So I warped it anyway, threaded for 24 EPI plain weave and then went on to work on organizing the room and setting up the sewing room. I did the ME towels. I put the new thread spools away. I spied the celery green rayon ME thread. That was yesterday. 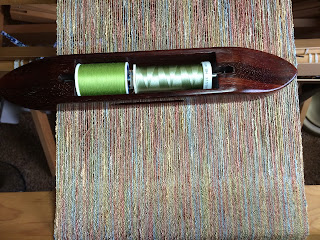 The fell of the cloth is just past the breast beam. See how little the warp is affected by the weft? It's exactly the effect I was looking for.

There are challenges, both with the boucle warp and the ME thread weft. To begin with, the boucle hangs up on itself. The warp can't be tensioned too tight or I don't get a clean shed. There were a couple of places I had to "unweave" to because there was a hole created by the weft getting caught in that "unclean" shed. I ran my fingernail over the fell every time I opened a new shed and this seemed to help.

Because the ME thread is so slippery, it comes off the spool when it wants to and even with another spool of thread in the shuttle as a spacer, the thread kept winding around the spool pin. I solved this by making an endcap that hugged the end of the spool, snug against the thread.

I also had to really watch my right selvage. Weaving along at a steady pace resulted in quite a few loops at first, mainly because of the texture of the boucle or the way I throw from the right, I think. Whatever the issue, I just have to pay attention.

I'm a wee bit anxious about the fringe on this because of the nature of the yarn, but I'll figure it out!

I've only got about 9" left to weave on this scarf. I may switch to blue on the next! 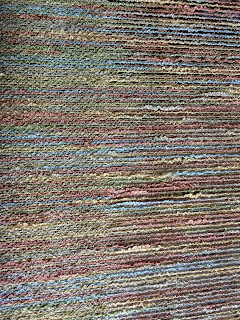 What a lovely scarf that will be!