My favorite gift for people headed off to college is monogrammed towels. Keeps them from walking off on their own, I've been told.

I just finished embroidering these yesterday. The young man is headed to the University of Washington next week. He used to sit on my lap when his sister and DD played soccer together so long ago. 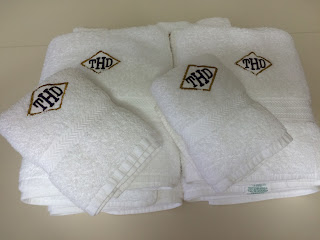 4 large bath towels, 4 hand towels and 10 washcloths (which I didn't monogram).
U of W colors, he chose the monogram.
I'm not a novice at this. I've done around 15 sets of these in the last 7 years. I've always used the same stabilizers, same bobbin thread, same polyester brand of thread. I'll admit I've had problems with stitch out at times, and when there's a little bobbin thread showing, out come the Sharpies. I have a rainbow of colors and this has always worked out well.
So. I found a lot of embroidery products that I'd forgotten I had when I moved upstairs. One of them was water soluble paper stabilizer that "dissolves in 10 seconds". That sounded like a better idea than tear away and would help keep the monogrammed area a little more pliable, I thought. I used a black tear away I'd never used under the letters. And I had a sample pack of Solvy that I thought I'd use up. One less thing to store, right?
On to the embroidery. I have PE-Design V7 which allows you to use imported true type fonts for monograms. I used a font that mimics a style used by U of W years ago. The stitch out was ugh... not good. I normally used the few fonts provided with the design software, or one purchased from Embroidery Arts and hadn't had this issue before. So I pulled out the manual. Added an underlay stitch, increased the density, fixed the tension setting on the machine and that fixed most of the problems. But once in awhile on just about every stitchout, there was that rouge bobbin thread pulling up. Out with the purple Sharpie.
Once all of the embroidery was done, I pulled off all of the excess stabilizer and Solvy, clipped all the threads and threw them into the wash. When I pulled them out of the washer... Okay, my Dad was military and my Mom could cuss like a truck driver. I put words together in combinations that would have made them blush.
Pink. Pretty faint, but the diamond area of the monograms was streaked with pink on almost every towel. DH suggested I blot them with rubbing alcohol to get an idea of how much more they would run. I did. No longer faint pink, but BLEEDING PINK LIKE A RIVER. I ran a full pint of rubbing alcohol over the monograms and still... At this point, I felt like I had nothing to lose. I knew the poly thread would be colorfast, filled the washer with hot water, threw in 4 packs of Dylon Run Away (which were over 10 years old btw), threw in towels (literally and figuratively) and then crossed my fingers. Which was a trick as both middle fingers just wanted to stick STRAIGHT UP in frustration.
Because the running pink was not my only issue. The "dissolves in 10 seconds" stabilizer or the "sample" Solvy had NOT dissolved into thin air, it had balled up and was pilled all over the vicinity of the monogram in the nap of the towels. I have NEVER had that happen in the 20 some years that I have been doing ME.
so.insanely.upset.
﻿
The Dylon appeared to take care of the pink problem, but I spent the next hour picking those little stabilizer balls off of the surface of the towels.

But hey, they look nice now! In the end, that's all that matters. I learned some new tricks for working with true type fonts and I learned to stick with my standard products for monogramming. I will also ALWAYS run a sample with the Sharpie markers and test for colorfastness and will test any new stabilizer or cover product extensively before adding it to my stash.

Another high note in this "learning experience" was doing it in the new space. I really love this new room. I knew where everything was without hunting and the entire stitching process was really quite enjoyable.

Now I'm going to weave. I have about 2 feet completed of a rayon boucle scarf. It looks good on the loom so far!

Sounds a nightmare. Glad you like your new room.