I'm finally getting into the swing of this retirement thing :) That's a whole separate post but it's what makes all of these possible. I highly recommend retiring as soon as you are able. It's awesome!


I've had the Louet Spring loom for 3 - 4 years, but have only had 2 warps on her. The first, a "holly" dish towel design, was a limited success. I had a lot of tension problems and the selvedges were pretty terrible. When I put the second warp on, I re-read all of the materials, watched the Jane Stafford video, and I'm pretty sure I didn't lock the breast beam when I put the 1st warp on. This was an enjoyable weaving experience. 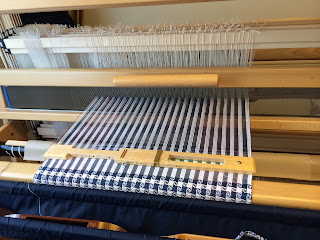 I wove 2 towels each of 3 different pinwheel tie-ups. I've looked all over for the drafts, but I may have (gasped) tossed them since I got it off of the interwebs and would be easy to find them again. Not. I did put them in Fiberworks. That's something.


Things I did different:
Things that needed improvement:

Things I learned:
Hence the title of this post. 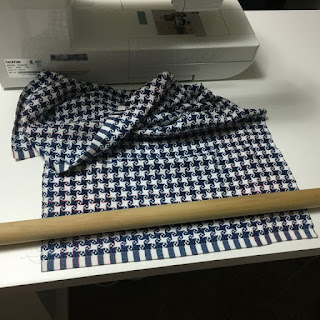 I didn't feel like I was getting the finished look I wanted from simply pressing with my iron. And I pressed HARD. I decided to try cold mangling as demonstrated by Laura Fry in this YouTube video.

Laura uses a much larger rod than I had. DH had a closet rod and that was good enough to test the process. I was mostly concerned about the trauma to my hands.

I have Dupuytren's Contracture in both hands, but it's worse in the palm of the left hand. After rolling one of the 6 towels, it was apparent that this qualified as trauma. To protect my left hand, I wore the brace I have from the last procedure. This worked well. For the right hand, I held a 4" x 4" x 1" block and rolled the rod using the block (kinda sorta like the Swedish method on a very small scale).

The results were worth it as far as I'm concerned. I don't know if these pictures really show it:


The motifs look crisper in the "after", as they do in IRL. The hand of the cloth is softer, drapier, and more cohesive. The threads don't seem to shift withing the motif as the cloth is handled.

I'll be headed to the hardware store to look for a large maple round this week. We'll see what I find! I've heard that Vavstuga will be importing powered cold mangles from Sweden. I sent off an email to them as I WANT.WANT.WANT!