Here are pictures of the towels folded in half after finishing. They had been tri-folded, and I didn't press them after folding. The selvedges are actually pretty straight IRL.

There are 2 each of the star patterns, 1 of the striped "bonus" plainweave striped bread cloth. I had one more draft to weave and could have done that for the 7th towels, but I was kinda sick of them by then :)


If you enlarge the photo's, you can see that there are red threads running through the sides and borders areas of the star towels. I thought this would make them look like sparklers shooting off red sparks. Ummm no. It lends a pink cast to those areas. But it's okay, I can live with it.

With the towels completed, I can go back to the boucle scarves. Yeah!

On the UFO front:

First up is a doll dress that my daughter started in a class she took with me when she was 14. She's 26 now. Her's is the dress on the right, mine is the one on the left. I finished mine a couple of years ago and completed hers up to the point of attaching the skirt to the bodice and finishing the back opening. Done!

Next is a 6"x 6" commemorative mini-quilt I started after our puppy Sophie was put down in Jan 2014. She had several large cancerous tumors in her chest pressing on her heart. Losing her broke my heart. It's square IRL. Looking at it makes me sad but happy that we got to have her for 8 years. 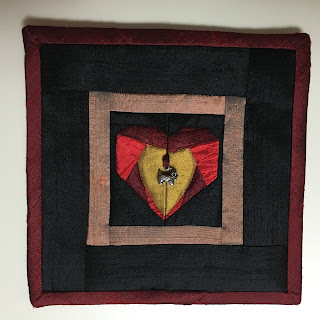 That's it for now!