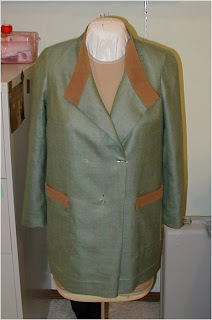 I am going to hold off on the buttons until I decide what I want to do for buttonholes. I'm leaving the hem open for the same reason, as I might need to get in between the shell and the lining, depending on what I end up doing. I feel like I want to do something “special”, but I don’t want to totally mess up what I’ve done so far.

This is also not something I can wear now with my recent weight gain. So it is part of the fall wardrobe I am sewing as I know I will be trimmed back to my preferred weight by then. As slowly as I sew, Fall is a good goal.


What I did:
Cut Size Medium of the long coat based on trying on samples at 2010 Puyallup Sew Expo prior to the weight gain. Subtracted 6 inches from the length.

I followed the pattern instructions exclusively until applying the facing to the lining. At the suggestion of Terry K, I visited http://nowsewing.blogspot.com/ and followed Martha’s process of clipping and joining the two pieces. I am not sure I would do this again with something as “free spirited” as the floral poly lining. While I could join and stitch the curves, there was enough distortion to the poly that I ended up with some bulges in the floral poly. I think with a more stable lining, it would be the way to go. If I were to do this over, I would starch the heck out of the poly first. And breathe slower. 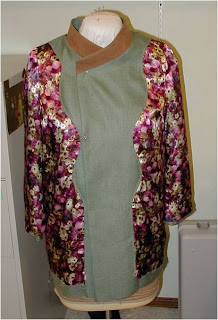 I had a couple of firsts with this project. Sort of firsts, considering I’ve done them before, just not in the last 20+ years, so it may as well be the first time!

Special thanks to the fly for holding the jacket open so I could get a good picture of the lining! 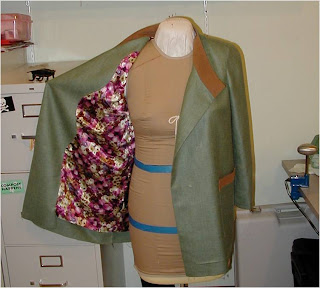 Off to plan jacket two.