Between work and delivering my daughter to University in late August, there's been little time to sew.

I had a last minute rush of things to stitch for Sarah: She needed a laundry bag and her pillowcases were too short for her king size pillows. She also needed something to throw on between her dorm room and the community bathroom. Her robe, a junior high relic, was not going to make the trip to the east side of the state.

Laundry bag and pillow cases were a breeze once I got the chain stitch on the serger operational. I've had this machine for at least 16 years and have not used the chain for at least 10. It was a challenge to get everything balanced. With that refresher course behind me, next time will be much easier. 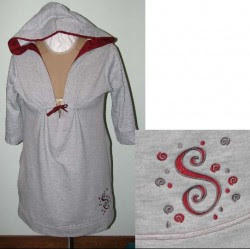 Sarah had a toss-on fleece coverup from Steve and Barry, but we both worried that it was a tad bit tight and would shrink in the laundry. We used that as the basis for a new one. The intent was to use some fleece I had left over from her and her brother's early years and make a fitting muslin, but it turned out so well, it became the finished product! The facing on the hood and bodice is a crimson marbled quilting cotton. The monogram is machine embroidered from a collection posted on SewForum.com. She liked it and that is all that mattered.

When she left, I felt a big hole in my heart. Then I walked into the sewing area. She had taken her machine and her workspace was so EMPTY. I mean EMPTY... Just the place to relocate my serger! And then there was the additional storage I'd wanted to put in. And room in the closet to move all of her stuff and Scott thinking her work table would be perfect for his brewing kitchen and WOW! So I did it. New table, new storage, serger relocated, cutting table cleaned off. Some piles left to sort, but overall, the room is mine again!

We all want our children to be independent. We want them to find wonderful lives, be productive members of society. But we never want them to be so far away that we can't reach out and touch them. Until she left, I didn't realize how twisted these emotions are.

She has a band concert this week at university. It is the first concert I will have ever missed in her life. I did miss two flute recitials along the way and two performances at local church services, but I believe that is not too bad in 6 years of performing. At the same time, I had three loads of laundry this week. I have not had three loads of laundry since they were away at summer camp! I made four dinners this week. Four. With her brother working and eating away from home, that leaves Scott and I with leftovers. No school functions. Zero. Her brother is not into the school activities thing and prefers to work.

What to do with the newfound time? With the union on strike, overtime has been CUT OFF. So no more excuses! Today I am attacking the blackberries that have been sorely ignored for the last two years. And tomorrow? I think I'll lay out a top to stitch up!
Posted by Jodi at 12:24 PM No comments:

One down,all the rest to go... The blouse is completed, all flaws previously disclosed notwithstanding. I am not totally unhappy with it and am ready to go on to the "good" version. I've purchased a really pretty silk brocade, white with blue, almost violet stripes, accented with navy. I think it's an upholstery fabric and it will need to be laundered several times before I cut into it. High hopes!

On a more personal note, I felt totally satisfied while sewing "the blouse". It was like I had come home. The process, more than the product, satisfied me. This happenes when I get time off from the job. That is long over. I am back and time for anything other is limited, as evidenced by the lack of posting and stitching progress.

This makes me very sad. Working 12 hours a day is not healthy, but I did, I fully remember doing so, tell the crew that there would be no summer of 2008. It is coming to pass and like it or not, that is that. So what to do? Plan those discreet moments where the soul can be refreshed with something other than numbers and endless streams of data.

This is the assignment for this week. Wish me only luck.

But of course we all know that that rumor was started by a 50 year old, right? Today I am 50. What a strange thing to see in print. I am not, in my mind, any different than the woman who who played with her two preschool children. It's undeniable, though. I am 50. I am more cynical while being more hopeful than I 've trusted myself to be in years. I tire more easily and am counting the days (8 years and 29 days) until I can retire. I am preparing to lose my darling daughter to arms of world as she readies herself for college. I see it all moving at warp speed right before these aging eyes. It revolves around me, but I am not moving within it. I remain ageless. Ummm, not so much. I check the mirror and confirm the wrinkles and grey hair are actually there.

I spent the day working on "the blouse". Yesterday was devoted to all of the pattern alterations for the infamous "full bust". After trying it out on the dress form, I not only did the FBA but added an additional side dart. I'm working with a stripe, and an unbalanced stripe at that, so it is creating some interesting geometry.

After basting at the shoulders and side seams, I removed over 2 inches from the back, which was also altered per the FBA instructions. I may have been to agressive... 1 inch might have been a better choice as she is binding a bit on the form in the back. Collar is on, all darting and side seaming complete, one front facing stitched in. All that is left is the RF facing and sleeves, then the quick machine hem. And buttonholes. I will save them for the VERY last! Picture tomorrow with any luck!
Posted by Jodi at 4:59 PM No comments:

The dress form fitting is complete! I'm very pleased with it, especially since I had to do it by myself! I'm still surprised it was as simple as it was. I was so relieved, in fact, that I had a nutty buddy when I was finished! (Apparently, I didn't spend enough time looking in the mirror while fitting the shell...)

I am now searching high and low for my Fitting Finesse book. I'm pretty sure I own this and didn't just borrow it from the library. It's been so long since I stitched for myself, that may very well be the case. What's the easiest way to disprove this theory? Buy the book. It will surface on it's own about the time the postmaster hands me the package!

I'm a little reluctuant to start cutting something out without this book by my side. Better log off and find it as the goal is at least one completed garment by the end of this vacation week.

YEAH! The book was hiding behind my manuals! It is so old, it predates the "Finesse" title. This is my 1990 copy, called "The Busy Woman's Fitting Book". I feel like I am in a time warp!
Posted by Jodi at 2:58 PM No comments:

After a long hiatus from sewing for myself, I've committed to start again. Like everything I do, I have to obsess about it for a fairly long time. I usually lose interest while I read, buy books, visit websites and collect all of the necessary tools.

Not so with this. I've done a fair amount of reading. I've bought a Dress Form that needs some work. I already have the sewing machines, the irons, scissors, notions and the rest.

So what do I lack? Fitting skills. As a teenager and young adult, I made most of my clothing. Ameturish but functional. Fitting was never an issue. The Big 4 fit like a glove.

Then I had children. I quit running. My hips and thighs conquered anything that even resemebled a "normal" shape. And my chest? It needs it's own blog...

Tomorrow the work begins. I plan on fitting the dressform cover if it takes me most of the day. I'm excited. And I hope I don't let myself down...
Posted by Jodi at 10:51 PM No comments: